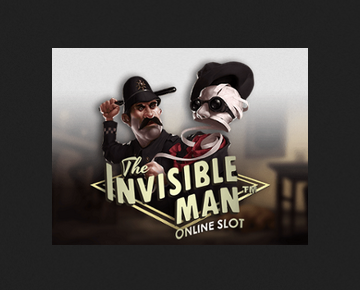 The Invisible man is graphically brilliant with an authentic feel and experience to it. It comes complete with a re spins feature in the base game with two wild symbols which combine to trigger the free spins game. This slot has five reels and twenty paylines, and the player can set the amount wagered per line. The Invisible Man was originally a novella by the famous author H G Wells published way back in 1897, and subsequently turned into a movie in 1933.

The story is about a scientist who devotes himself to researching optics in order to turn himself invisible. The Invisible Man has also been added to the prestigious NetEnt Touch series, and is thus now available on mobile devices as well. The game is graphic heavy however, and is better viewed on a larger screen.

Graphically The Invisible Man is a very good game. It boasts authentic sounds, voices and animation from the original movie. As the game is based on a horror movie, it has an overall dark feel to it. The background is a mixture of a dark grungy green and black, setting off the symbols which look almost smoky and translucent. Base symbols are from the deck of cards, 10 to Ace, and are done in a slimy green color. The rest of the symbols are straight out of the move, 1930 looking ladies, men in bandages and other period pictures. Two wilds exist in the Invisible man, namely the Police Wild and the Griffin Wild.

As mentioned The Invisible Man has a few different wild symbols up its sleeve. These include the Police Wild, the Griffin Wild and lastly the Burning Wild. Each wild has its own features and acts in its own way leading to different benefits for the player. Police Wilds for example can only be found on reel 1. At the beginning of each re spin the Police Wild moves to the right, to the next reel.

The Griffin wilds appear on reel 5 only and move to the left, i.e. to the previous reel on each re spin. If the Police and Griffin wilds overlap at any point this will trigger ten free extra spins. Finally the extra wild, the Burning Wild, is a normal wild that appears during the Police spins bonus feature to trigger some extra wins and prizes.

Bonus Round and Extras

Players will then receive three bonus spins and four Burning Wilds at random during this round. Should a player find the Invisible Man in the correct location during either of these rounds, a number of different prizes and extra multipliers will be awarded as well.