Video poker is a handy option for online casino fans who enjoy draw poker, but don’t want to compete against anyone except the house. There are now myriad versions available to Canada’s casino enthusiasts online, at stakes to suit all pockets. There are several quirky rule variants, even stretching to multi-hand options, and it’s one casino pursuit that suits fans of card games and slots alike.

In all versions, basic game play is similar: after placing a bet, the player is dealt a five-card hand from a 52-card deck. They can hold any number of cards, discard the others and draw replacements from the remains of the same deck. The hand is then evaluated according to any poker combinations it contains, and any wins are paid out according to a pay table.

It was the success of video poker as a digital game that paved the way for computer slots, and the huge variety of both categories that Canadians can enjoy at online casinos today. The two are intertwined even further back in history; more than 100 years ago, the first mechanical poker gambling machine was an adaptation of the fruit slot machines that were already popular.

In the mid-1970s, casino games giant Bally were not enthusiastic about a new game, premised on the growing popularity of primitive computer games, that one of their distributors was urging them to release. When Bally decided there was no market for it, they allowed that distributor, Si Redd, to buy the patent on ‘Video Poker’.

A deal with a Reno slots-building company allowed Redd to start building and distributing video poker machines under the name Draw Poker, but at first, they weren’t attracting much business in Nevada’s casinos. At the time, the pay table only paid prizes for hands of two pair or better.

Once Redd’s company tweaked the pay table so that a pair of jacks or better paid out, the game took off, even though the screens at the time delivered the same grainy performance as TV computer games like Pong. By 1981, video poker was the most popular new game in land-based casinos.

Over the past 36 years, advances in micro-processing and the advent of the internet have transformed the original game into the dozens of video poker options that Canada’s casino fans can now enjoy online.

The first poker machine, created by Brooklyn, New York’s Sittman and Pitt Company in 1891, used five drums containing 10 cards each. The so-called ‘father of the slot machine’, Charles Fey, came up with an improved version in 1898, which could automatically pay prizes of up to 20 coins. 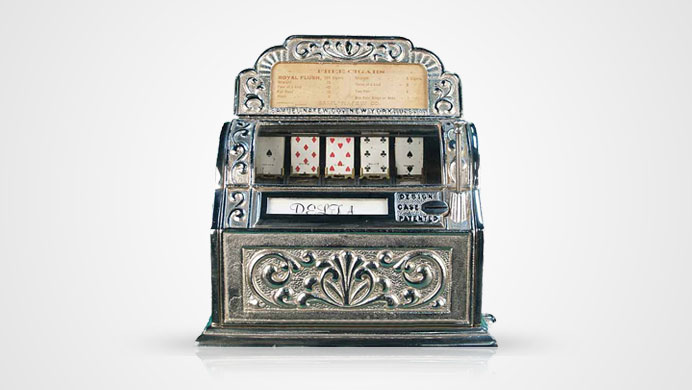 That was the prize for a royal flush; but since players only saw the cards flashing past on the spinning drums and in their final positions, most didn’t realise a 50-card deck was being used. The two cards missing were generally the jack of hearts and the 10 of spades, making a royal flush possible only in diamonds or clubs.

This problem, from the player’s perspective, persisted when video poker acquired draw capabilities for the first time in 1901. To replace his original machine, the Card Bell, Fey brought in the Skill Draw, with hold and re-spin features.

Due to the limitations of the mechanical device, however, players were still only getting a 50-card deck. It took the power of the computer to deliver a pokies machine with true online pokies Australia odds.