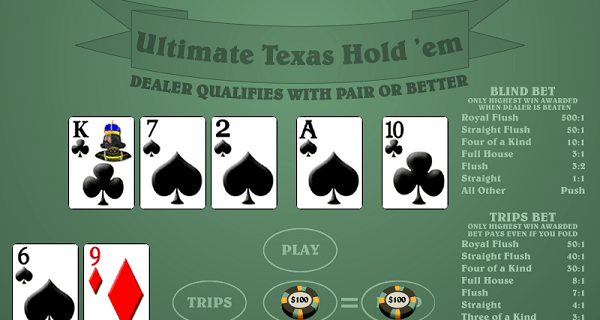 Ultimate Texas Hold’em, based on the classic Texas Hold’em game, was invented and developed by Roger Snow of Shuffle Master. It is one of the newer Poker variations, and is very in demand in Las Vegas and around the rest of North America.

The game was originally available on multi-player electronic machines only, but its popularity increased steadily over the years and it was expanded into a table game. Today it is played in several land-based and online casinos.

A single 52-card deck is used in this game, and to begin players need to make a Blind and an Ante Bet. The Ante remains in play even after a Raise has been made and even if the Dealer does not open, which makes Ultimate Texas Hold’em quite unique among Poker game variations.

After the bets are placed, the players and the Dealer are all given 2 cards. The player can see his or her cards, but nobody else’s, and must decide whether to check or to raise the Ante by 3 or 4 times based on this information.

The remaining 5 cards of the hand are dealt as community cards, and everyone can see and use them. The first 3 of these are dealt in a round called the Flop. One of the key features of Ultimate Texas Hold’em is that you can raise once, and are then done with your active part of the game. The earlier you Raise, the more you are allowed to bet, so players who did not Raise the Ante before the Flop are now given the option to do so, but only by 2. Once this is resolved, the last 2 community cards are revealed.

At this point, players need to match their Ante or choose to Fold. After this is done all hands are revealed and assessed in combination with the community cards. The Dealer’s hand must contain at least a pair to qualify. If this is not the case, the ante pushes no matter what is in a player’s hand. If the Dealer does qualify, then of course the best hand wins the Ante.

It’s also possible to make a side Trips Bet, which pays out according to your final hand. This means you are always paid something unless you only hold a pair or less, but the House Edge is usually substantially higher than for the main wagers. Other side bets might also be available.

As with all Poker variations there are plenty of analyses available for this one, with specific instructions on what to do in every possible circumstance.

Players will also develop their own skills and tactics over time, especially if they take advantage of the free play options that are available online. This is a great way to try out new advice or tools, or just to practice. When they feel ready, they can start placing real money bets.