Digital casino game developers Net Entertainment became one of the biggest in the business by finding out what online gamblers like, and giving it to them. They have long been renowned for their impressive range of slots, but statistics show that many online players in the USA enjoy scratch cards almost as much.

In response, NetEnt has developed and continues to develop a growing number of scratch card games to rival their slots titles. Triple Wins is a version that will appeal to America’s online casino fans, especially those who believe in the lucky powers of the number 3.

The Triple Wins game interface is a screen split down the middle. To the right are the player options. Against a spotlit stage backdrop, a fan of 10 scratch cards is displayed, for players to pick the card they wish to buy. If none of the cards feel lucky, the player can click on 10 New Tickets to choose from a different selection. Once the playing ticket has been chosen, the player places the best bets, which is 0.50 in the currency being played. At this point, their chosen scratch card is placed on the left of the screen, where the game play continues.

Against a backdrop of tumbling coins and cash, the Triple Wins scratch card presents a simple square 3X3 grid with hidden symbols, and an X below them to be scratched to reveal a multiplier. Many scratch card players have superstitions and rituals that add to the fun of playing, and they will want to pick a scratch tool using the button at the top of the right-hand screen, then scratch all 10 squares on the ticket themselves.

Scratch tool choices include coins and guitar picks. Those who prefer quick play with as little mouse work as possible will want to click the Scratch All button, also on the right side of the screen, which reveals all 10 blocks instantly. 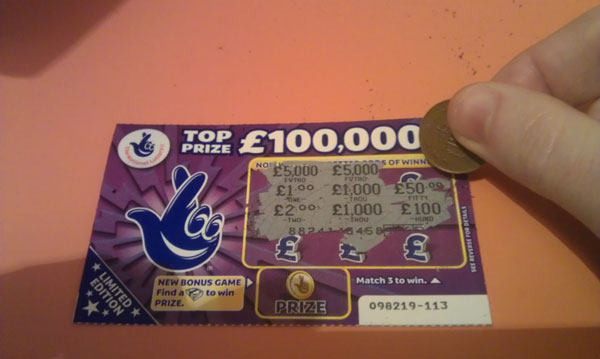 Prizes as High as 10,000 before Multiplier

The scratched blocks will reveal amounts of between 0.50 and 10,000 in the relevant currency, with a range of values in between. Three matching symbols anywhere on the ticket win a prize to the value of that symbol. However, the multiplier revealed in the tenth block ranges from X1 to X10, so it can significantly increase a Triple Wins prize.

Do the Math Using the Pay Table

A feature that many players around the USA find helpful in NetEnt scratch card games is the Pay Table. They can access it via a button at the base of the left-hand screen. This not only lays out the winning prizes Triple Wins has to offer, but it also tells players how many cards with each winning combination can be expected in a run of 1,000,000. Obviously, 0.50 prizes crop up hundreds of thousands of times, while the biggest wins will only appear once or twice.

By knowing what ratio of high to low prizes they can expect, skilled players can work out how long they will need to play Triple Wins to stand a good chance of triggering bigger prizes, and budget accordingly. Speed of play and volume, etc., can be adjusted using the usual NetEnt toolbar at the base of the game frame.