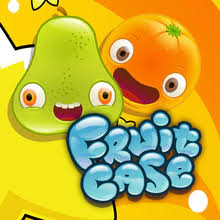 Fruit Case is a slot that makes use of a five reel, three rows and twenty-fixed Paylines structure.  Inspired by the jam making process, Fruit Case slot is themed around whacky little fruit characters about to meet their jammy fate.

Developed by Net Entertainment, players opting for a game of Fruit Case slots can expect a simple structured slot game with special wild and free fall symbols that triggers a free spins bonus round.

The backdrop to the reels is a solid tonal colour that allows the reels to pop with the vibrant fruit characters. Bordering the reels, a factory with pressure equipment that is used to monitor the jam making process is on display.

Featuring useful buttons such as the Coin Value and Bet Level that allow for interchangeable wagering stakes within the slot. The fixed Paylines structure keeps the winning ways maximized within the slot.

Plain yet humorous graphics spin on the reels, whacky fruit characters give the game a presence and add character to the reels in a saturated gaming theme.

Funky fruit characters awaiting their jam jar fate, fill the reels in Fruit Case slot game. These fruit symbols include; a disturbed lemon, a rather joyous pear, a happy orange and a shocked strawberry.

The Fruit Case game logo acts as the games wild symbol. Completing winning combinations with the help of the wild symbol will trigger a knock on multiplier, which can be found on the scale just above the reels, to the right of the screen when you’re playing this epic game.

Fruit Case slot features a Free Fall symbol, which is represented by the blender with the words Free Fall clearly displayed in pink on the graphic. Keep an eager eye out on the reels as landing the Free Fall blender symbol can trigger the bonus round of the slot.

The Knock On Multiplier

The most lucrative potential of the Knock On Multiplier comes from Creating more winning combinations to move up to a maximum of an eight times dynamic Multiplier.

If players happen to strike it lucky and jam three Free Fall bonus symbols on reels one, two and three the free spins feature of Fruit Case will be initiated. Players will now receive ten free spins with all winnings subject to a handy three times Multiplier.