Mugshot Madness, an online video slots game developed by Microgaming, delves into the popular gaming theme of cops and robbers. Although this theme is very much overused among game development companies, Microgaming’s experience and capabilities regarding the entertainment value of their games is beyond reproach. This video slots game was released in May 2013.

The storyline of Mugshot Madness slots is all about a gang of criminals, portrayed on the games’ reels by appropriately clad animals of various types, who are overly desirous of committing some dastardly crime. They need to be stopped by the protagonist, detective Jack Murphy, a handsome young lad of a dog. The graphics in Mugshot Madness are of a high quality and contain a variety of different animations. Mugshot Madness video slot machine has 5 reels and 20 paylines, with a number of features.

Mugshot Madness is not a progressive jackpot. The maximum coin jackpot payout is 20 000 coins. The game includes the benefits of Wild and Scatter symbols, and the availability of plenty of free spins. The main feature Bonus game is the Line Up feature. During this Bonus game, players could win up to 25 free spins. The Line Up feature itself involves players catching the criminals and putting them into various winning combinations. There is a multiplier attached to each criminal caught and the biggest prize is the crime boss, Moretti, who delivers a multiplier of 10x when caught. 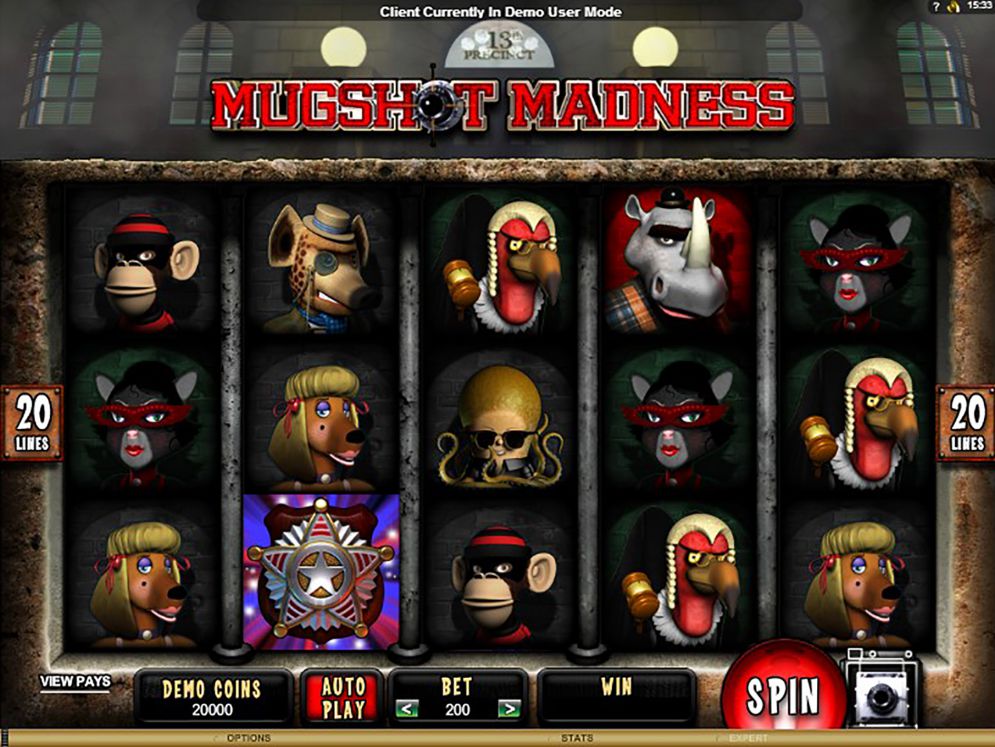 The symbols used on the reels in Mugshot Madness slots, as the criminals in this game, are a variety of different animals. There are cats, foxes and dogs, all dressed in trench coats and ‘50s trilbies. Elsewhere on the reels players will find a buzzard Judge, an octopus kingpin, crocodiles, monkeys and rhinos. Detective Jack Murphy, is the game’s Wild icon, and this icon substitutes for all regular symbols other than the Scatter symbol. Not only that, the wild adds a multiplier of two to every winning combination it helped form.

The Sheriff’s Badge is the Scatter symbol in Mugshot Madness. Should three or more of these symbols appear anywhere on the reels, they trigger the bonus Line-Up feature. Depending on how many Scatter symbols appeared when activating the bonus round, players win either 10, 15, or 25 free spins. Criminals are ‘captured’ when their symbol forms part of a winning combination during the free spins feature on Mugshot Madness. These bad guy symbols can only be caught once during the feature and when they are caught, their symbol on the reels is replaced with a black and white mugshot. Multipliers are then progressively attached to these wins, increasing by one up to a total of ten.

Mugshot Madness online video slots is graphically excellent and has a theme that is evidently popular among most slots players. The slots game itself is one of reasonably low volatility. The objective of the game is to achieve the Line Up feature, as success is very much dependent on this bonus feature since all 20 paylines are fixed. When the free spins effect is felt, however, the odds are in players’ favour.