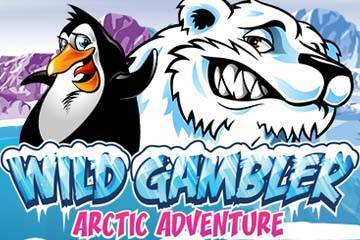 This slot contains plenty of Antarctic imagery, including various animals like walruses and penguins that are native to the region. Playing out over 5 reels and 20 paylines, players can expect to find free spins, lockable wilds and more during the game.

The reels of Wild Gambler – Arctic Adventure are set against an icy backdrop. Tall ice mountains and a glacier are visible behind the reels, and the reels themselves look like they are formed out of blocks of semi-transparent ice.

These ice blocks also form the game’s pay table, and an igloo forms the Lock & Spin button which activates one of the bonus features. On the reels are a collection of Arctic animals that have been designed in a cartoon style, as well as playing card symbols which also appear to be formed out of ice blocks to add to the theme.

The main symbols offer higher payouts. These symbols include a moose, a penguin, a white wolf, and a walrus. The walrus is the most valuable of these symbols, awarding 800 coins for 5 of a kind on the reels. Next is the moose, awarding 500 coins if players can land 5 of a kind.

The free spins feature in Wild Gambler – Arctic Adventure offers 7, 12 or 20 free spins for 3, 4 or 5 scatters, respectively. Additionally, any wilds that land on the reels during the feature will freeze in place and remain there for the remainder of the bonus game.

Another bonus feature in this Ash Gaming slot is the Lock & Spin Wilds feature. Here, players will have the option to freeze wilds on the screen as they appear by using the igloo button below the reels.

There is also an option to increase the applicable multiplier for an extra bet. Players can also click on any symbol in the game to turn it wild, and also increase the multipliers here for a higher stake per spin.

A polar bear forms the wild symbol in Wild Gambler – Arctic Adventure. This wild symbol substitutes for any other symbols on the reels, barring the scatter symbol. The wild is the highest paying symbol in the game too, awarding 1,000 coins for 5 on an active payline.

The scatter symbol in Wild Gambler – Arctic Adventure is a silver coin scatter. Landing 3 or more of these scatters on the reels will trigger a free spins feature.